An experimental sundial was inaugurated on September 21, 2016 on the southern forecourt of the Cité des sciences et de l’industrie.

The origin of this dial realized on the principle of the "invisible" or "roofed" sundial would go back to 16th century. It consists of a white wall on which is placed a red dot, without indication. This wall is placed in the shade of a shelter roof in which hour lines with corresponding figures have been traced and cut out. When the sun is shining, the rays pass through the openings, revealing on the wall beams of light with their figures.

We really have only a single testimony on the realization of this type of dial, and we don’t know if a single hourly line luminous was projected or if all the hourly lines was visible. At the Cité des sciences et de l’industrie, we see first a ray of light genuinely emerge. More it moves towards the red point, more its luminous intensity is important.  Its brightness will be maximum when the ray of light passes over the indicator spot. A short time after the beam of light passes the read spot, new one weakly brilliant line appears on the left. But as the new hour line moves closer to the red spot, its luminous intensity increases to become maximum as it passes over the spot. In the meantime the preceding line has faded away, its brightness decreasing gradually until it finally disappears and allows the next line to take its place.

Come to experiment this original and unique sundial. You will find explanation [principle, transition from solar time to legal time, reading between two hours, installation] on the walls of the device and in the a free audioguide which you can access from this web page and on site, by flashing the dedicated QR Code with your Mobile. 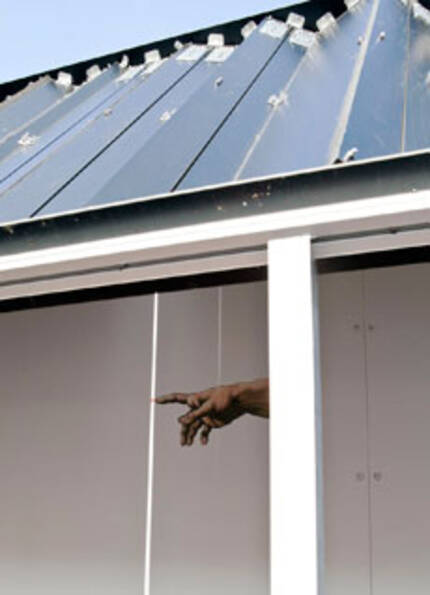