How do artists incorporate deep knowledge into their visual research? What discourses do they shape on innovation and technology? How can their approach transform our understanding of the world?

In 2021, the Cité des sciences et de l’industrie launched a programme that, once a year, invites an artist to share their research in its gallery. The guest artist then reveals their work over a period of twelve months. They are given a grant and the use of the resources at Cité, including help from facilitators and scientists.

During the residency, the public can connect with the imagination of artist-researchers exploring scientific topics. Over the course of these meetings, it fosters dialogue between the latest scientific and creative developments.

“Hidden in the cynicism of innovation is certainly the despair that nothing further will happen.”
J.-F Lyotard, The Inhuman. (1988)

In residency at the Cité des sciences et de l’industrie since October 2021, Grégory Chatonsky has delivered the first chapter of his “Disnovation” triptych. The initial instalment coproduced with the Centre Georges Pompidou brings us into contact with virtual actors leading us to a strange dystopia. At the centre is the artist himself, supposedly dead, who gives an endless address on what innovation was when he was still alive. This long monologue commingles discourses on meditation, personal development and life on Mars. We conjecture that this character and those around him live or have lived on the red planet. As their faces emerge, we have a strange feeling of déjà vu. The “companions” around the artist are none other than Elon (Musk), Mark (Zuckerberg), Jeff (Bezos) and other Gafa bosses, whose facial features have been aged, along with those of the artist, by artificial intelligence.

Gregory Chatonsky here shares his theoretical considerations on progress, innovation and the dislocation of our knowledge and certainties. “Innovation is about endlessly producing something new, whatever it takes; it is primarily about producing more and more new things, through material production and discourse; in other words, the differential is what allows us to evaluate the new thing itself,” he writes. Over the years, the artist-researcher has created systems that, with a touch of irony, shake the very foundations of the relationship between sciences, culture and beliefs.

His approach is particularly unique in that he is one of the few contemporary artists to develop a practice informed by multiple fields of research. A specialist in artificial intelligence and trained in the visual and digital arts and philosophy, for two decades Grégory Chatonsky has worked matter in exactly the same way as thought, continuously exploring a world where humans as we know them have already disappeared.

Grégory Chatonsky was born in 1971, lives, and works in Paris and Montreal. 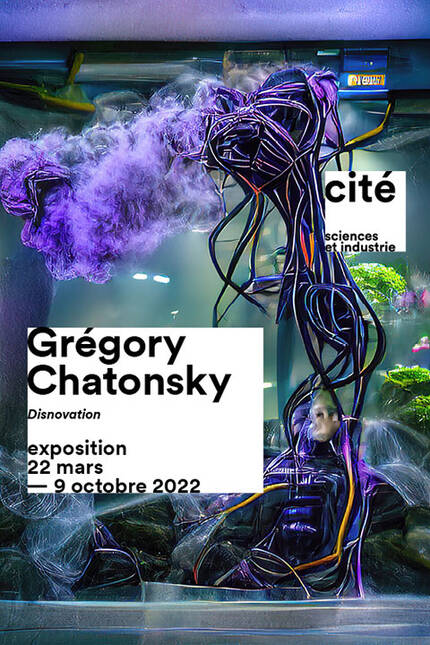